Posted on August 6, 2011 by parklinscomb

Another example of how faithful men have bent every effort to have and hand down God’s holy word is the Dead Sea Scrolls. Rightfully fearful of a Roman army that would have had no respect for the Scriptures, a Jewish commune near the Dead Sea hid their precious scrolls in earthen jars and hid the jars among the hundreds of caves in the area about A.D. 70-73. The commune was swept away by the 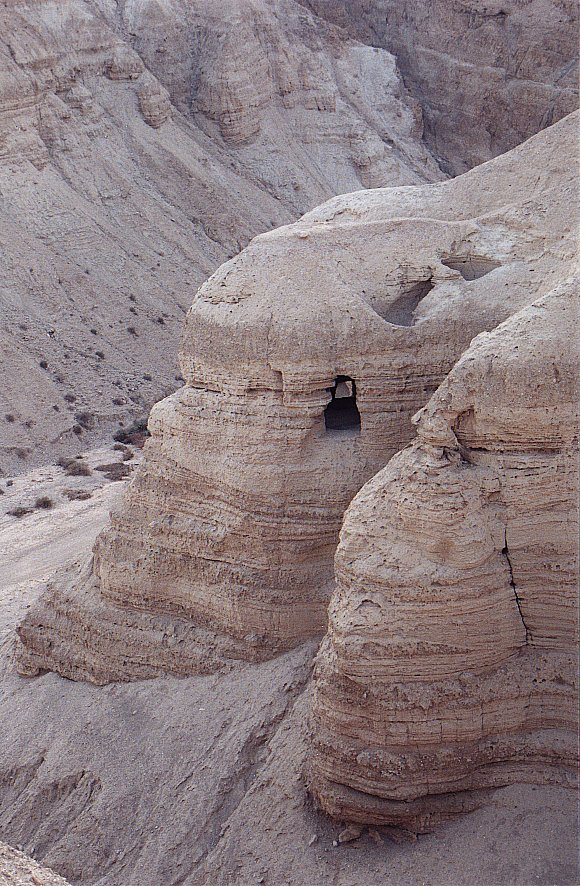 Romans and the jars were left undiscovered until the late 1940’s, when a bored shepherd boy, throwing rocks into caves in the area, heard the sound of shattering pottery and went up to see what he might have broken. It turned out to be the hidden jars and over the next several years additional and very important scrolls continued to be found. This picture is one of those caves in the Qumran settlement. The Dead Sea Scrolls have verified the correctness of the text (e.g., the book of Isaiah) that we have had handed down to us over the years — copyists have been meticulously careful to transmit only God’s words down to future generations. Thank you, God.

In faithfulness You have afflicted (Psalm 119:75) — We don’t often think about affliction as being an act of faithfulness — and yet here it is in black and white for us to read and ponder. Yet, the more we do ponder it, the clearer it becomes that faithful fathers discipline their children.

“and you have forgotten the exhortation which is addressed to you as sons, “MY SON, DO NOT REGARD LIGHTLY THE DISCIPLINE OF THE LORD, NOR FAINT WHEN YOU ARE REPROVED BY HIM; FOR THOSE WHOM THE LORD LOVES HE DISCIPLINES, AND HE SCOURGES EVERY SON WHOM HE RECEIVES.” It is for discipline that you endure; God deals with you as with sons; for what son is there whom his father does not discipline? But if you are without discipline, of which all have become partakers, then you are illegitimate children and not sons.” Hebrews 12:5-8, NAS95.

No one likes it, but everybody benefits from it; and we’d believe that our fathers didn’t love us, if they merely enabled us permissively to do our own thing — be weak, undisciplined, lazy, foolish, uncivilized, immoral, and often criminal. So, yes, He does afflict us in faithfulness and teaches us why in His holy word.

Sticking to your guns (Psalm 119:87) — Here’s the real test of our discipleship, isn’t it? When persecutors, enemies, push us and push us and push us — tempting us to return their evil in kind — but to stick to your faith and do what’s right. In this verse the psalmist tells of the pressure put on him by those who hate him — unless this is hyperbole, they almost managed to persecute him to death! But he holds on to his integrity, not forsaking God’s commands and precepts. How often have you been severely tried? How often have you succeeded in remaining faithful? Job did, but it wasn’t easy. How often have you fallen short? Peter did, and then, according to the Scripture, went outside the walls of Caiaphas’ house and wept bitterly. It’s hard, really hard sometimes — whether it’s physical threats or social pressure. But remaining faithful is not only a matter of integrity, it’s actually to our benefit — after all, God’s way is best, and it shines brightest, showing itself to be the best thing, when it’s hardest to do.

Better than perfect (Psalm 119:96) — Have you ever seen perfection? A perfect device, a perfect apple, a perfect day, a perfect circle? No flaw, no scratch, nothing that you could improve — perfect. But there’s something that better than perfect, God’s word. Even perfect things in this world will grow old, get dented, begin to rust, or ultimately fall apart; it’s the nature of this world. But God’s word in all its flawless perfection is eternal! It’s truth in its purest form and will last beyond time, beyond the laws of nature, beyond this universe. For those who appreciate perfection, there’s something even better than perfect, God’s word.

I'm a minister for the Rock Hill church of Christ in Frisco TX where I've worked since 2020. I'm a big fan of my family, archaeology, the Bible, and the Lord's church.
View all posts by parklinscomb →
This entry was posted in Bible commentary, Christianity, Old Testament. Bookmark the permalink.