Posted on August 5, 2011 by parklinscomb

This picture is (I was told) one of the oldest known complete copies of the Gospel of Mark. We have such incredibly easy access to God’s word that we often take it for granted, but Christians and Jews spent incredible amounts of 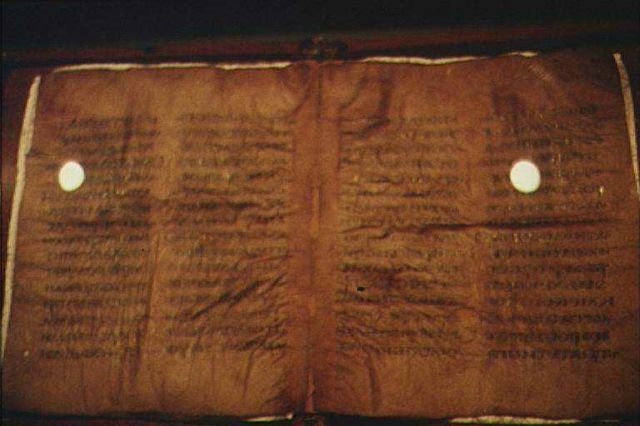 The Gospel of Mark

time and gave painstaking efforts at making and obtaining one good copy of God’s eternal word. Some believers who held their Bibles in spite of national laws to the contrary risked (and lost) their lives for the privilege of owning and reading the inspired Scriptures. All of which reflects the sentiments and meaning of so much of what we’re reading in Psalm 119 now and the next few days.

Your statutes are my songs (Psalm 119:54) — What’s the soundtrack of your life (pilgrimage)? If your life were a movie, what would be the soundtrack? There are few folks I’ve met and known that “Highway to Hell” would be appropriate — not that I wished it for them but rather that it seemed like they were dead set on heading there with every decision they made. But what of your life and mine? Would God’s statutes be your soundtrack? The psalmist would like his soundtrack to be God’s words.

Don’t delay (Psalm 119:60) — One of the quickest ways we can sabotage ourselves in our spiritual lives is just to delay, when we’re confronted with doing right or wrong. The psalmist points us in the right direction, when he tells us that he didn’t delay obedience to God’s command. You can do that, you don’t have to think about it, when it comes to obeying God’s word. It’s good, it’s wholesome, and it’s always right! The psalm even says that the writer hastened, hurried, in obedience. That’s something you do when you’re confident and see the counsel as valuable. Do you delay? Think about it? Drag your feet? Hasten to obey!

What He is and what He does (Psalm 119:68) — This portion of Psalm 119 mentions a couple of times that the psalmist was afflicted and learned something from it. Part of the lesson learned is apparently that God has our best interests at heart — “You are good and do good, teach me Your statutes!” And that’s a tremendous realization, especially when we suffer and might find ourselves wondering why. It isn’t a direct answer, but God is good and He does good — so we can rest confidently in the tempests of life, knowing that our God is in control.

I'm a minister for the Rock Hill church of Christ in Frisco TX where I've worked since 2020. I'm a big fan of my family, archaeology, the Bible, and the Lord's church.
View all posts by parklinscomb →
This entry was posted in Bible commentary, Christianity, Old Testament. Bookmark the permalink.