Posted on January 3, 2012 by parklinscomb

The apostle Paul was not one to let the grass grow under his feet. He was a man with a mission, a purpose in life that drove him; so although he came “home” to Antioch of Syria, he didn’t stay there for very long. He anxiously wanted to find out how the churches they had planted were doing and advance the Kingdom even more. As we advance further into this new year, may we all find our purpose in the Lord’s purpose for us. Purpose is the reason we get up in the morning, the reason we draw breathe. It’s no hobby or diversion — it is life itself! Find God’s purpose for you and let it drive you, let it give real meaning to your every day.

But speaking of Paul’s second missionary journey, let’s get into what the text talks about and what it means for us…

As noted yesterday, Paul didn’t launch this missionary trip with Barnabas, because of a disagreement about taking Mark with them again. But though they were in disagreement, they at least behaved like Christians and divided the work load as they sought to strengthen the churches that they’d established. Barnabas went back to Cyprus and Paul went back to Cilicia, Pamphylia, Lycia, Lycaonia and Galatia (south-central Turkey). Christian brethren who disagree (and we often do on matters of opinion) should follow Paul’s and Barnabas’ example of Christian unity, even in “sharp” disagreements.
As Paul finished checking on his already established churches and delivering the decree from Jerusalem regarding Gentiles (Acts 15), he also picked up another companions beside Silas to help in the ministry of missionary evangelism, Timothy. He was a young man and Paul quickly “adopted” him as a “son” in the faith — a close mentor/protege relationship that apparently lasted throughout Paul’s life. Having finished his work of encouragement among the already established churches, Paul sought to plant new ones. His first thought was to continue preaching in Asia minor, but when the Holy Spirit forbade it and Paul received a vision to pass over the Macedonia (the Macedonian call), he and his companions forged ahead into the continent of Europe.

Their first evangelistic stop was in Philippi, a Roman colony. That this was a Roman colony is important in understanding some of the rest of the story. 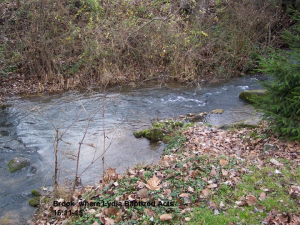 A river near Philippi, probable location of the place of prayer

Roman colonies were something like Roman retirement communities for Roman soldiers in far-flung parts of the Roman empire. They were little islands of Roman culture in foreign lands: Latin was spoken, Roman customs were upheld, Roman architecture and amenities were the rule, and Roman law was strictly enforced. This is why there were so few Jews in town that when Paul sought a synagogue, he couldn’t find one and he was forced to look for fellow Jews down at the local river (a Jewish custom for prayer gatherings referred to in Psalm 137, in situations in which there were less than 10 Jewish men in a community). It is also how Paul is able to protect this infant church against Roman persecution by pulling his “citizenship card” after he had already been beaten and jailed without due process of Roman law. In doing so, Paul gives us a great example of how to be “Wise as serpents and innocent as doves” (Matt. 10:16) — to protect a young church.

After Paul had been “encouraged” to leave Philippi, he and his companions opted for Thessalonica. He found great success in his preaching in the local synagogue, among both Jews and God-fearing Greeks. Some Jews filled with jealousy, probably over Paul’s preaching success, especially among the Gentiles, stirred up trouble throughout the whole city, claiming that “These men who have upset the world have come here also!” The King James Version translates, Acts 17:6 “…These that have turned the world upside down are come hither also.” I sort of like that translation, because in a way it is true that the Gospel turns the world upside down — which is really right side up! In any case, the trouble that they managed to stir up created such a dangerous situation that the brethren encouraged Paul to leave for his own safety. So, Paul left a church no more than 3 weeks old, which explains the concern that Paul expresses to the church there in Paul’s first letter to the Thessalonians (1 Thessalonians).

How was such a young church able to stay together and remain strong? First, you have to credit Paul’s strong teaching. Today’s church leaders sometimes have a very weak emphasis on doctrine, believing that it is not what people want to hear — they want practical application of Jesus to their lives. What is little understood is that practical application comes out of the doctrine. We live what we believe and we believe what the Bible teaches (a less offensive word than doctrine, but meaning exactly the same thing). Second, the Thessalonian church had some strong Jewish leaders who already had a solid understanding of Scripture, now improved and strengthened by Paul’s teaching. Strong leadership is always important and strong leadership could be defined as men who know the Scriptures well, live the Scriptures well, and stand strongly against false teaching. Third, the church doubtlessly had some of the gifts from the Spirit (prophecy, special knowledge, etc.) as many of the early apostolic churches did, to help guide them (see Acts 8).

Paul’s next stop, fleeing from Thessalonica, was Berea. As always, Paul’s first stop was in the synagogue, where this time he found a very friendly and sincere audience who were examining the Scriptures daily with great eagerness to see if what Paul said was really so. What an outstanding example to follow for anyone today. Men often get things wrong — sometimes accidentally and sometimes deliberately — but God’s word remains constant and true. Whatever a preacher or teacher says, no matter how esteemed he may be, should be checked with the one, always-reliable standard of truth, the Bible.

In time, word of Paul’s preaching in Berea got back to Thessalonica, just up the coast; and the trouble makers that got Paul booted out of Thessalonica came to run him out of town in Berea, too. So Paul traveled on to Athens, the Harvard of the world. As usual he began preaching in the local synagogues, but also in the marketplace (agora) just below the acropolis.

A view of the Acropolis from Mars Hill

Some of the local philosophers got into discussions with him and invited him to speak at Mars Hill, a little outcropping of marble rock just NW of the nearby acropolis and famous Parthenon. One might expect that a Jewish Christian, provoked as he was (Acts 16:16) about the idols would “lay into them” about their benighted ways. Instead, Paul deals gently, yet truthfully, with them. He calls them religious, a compliment — probably as he gestured toward the Parthenon close by. He leads them to arrive at the conclusion that God is not many but one, not living in humanly constructed temples needing to be served by men, and that he made us all. He, in fact, made a lot of headway, until he mentioned the resurrection, a real sticking point with the Greeks. Even so, some did come to be believe.

I’d like to note here, however, that being religious was simply not enough. Being moral (the philosophers spent their lives trying to discover truth, morality, and happiness) was not enough. Being smart and well-educated was not enough. Only Jesus is enough. I mention this, because we live in a world that thinks that these other things are enough. We must not get sucked into believing the lie that all is well with most of the “nice” world. Nice doesn’t cut it; John 14:6 “Jesus *said to him, “I am the way, and the truth, and the life; no one comes to the Father but through Me.”

Paul wasn’t forced to leave the city of Athens, but chose to go to Corinth, where he spread the Gospel with great success for about the longest time he ever stayed anywhere. While he was there, he met a certain Aquila and Priscilla, who had been among the Jews who had been kicked out of the city of Rome for riots and disruptive disputes over a certain “Chrestus” (see Seutonius— probably a misunderstanding or mispronunciation of Christ in the disputes doubtlessly that occurred in the synagogues of the city.

It is uncertain whether Paul converted them or they were converted in Rome or even on Pentecost. But one way or the other, they were a power husband and wife team that did a great deal of work in the early church. Of the two, it would seem that Priscilla may have actually been the more vocal of the two, since here name is listed first in a couple of occasions in the New Testament. This is great testimony of the power of an active Christian couple who work together in the cause of Christ. Perhaps your marriage could be just such a powerful team in your congregation!

I'm a minister for the Rock Hill church of Christ in Frisco TX where I've worked since 2020. I'm a big fan of my family, archaeology, the Bible, and the Lord's church.
View all posts by parklinscomb →
This entry was posted in Bible commentary, Christianity, New Testament and tagged Bible study, innocent as doves, not all religion is good enough, purpose, teams, wise as serpents. Bookmark the permalink.